Sunrise over the Loire this morning

A few snaps taken this morning while dog walking along the river at Le Thoureil. 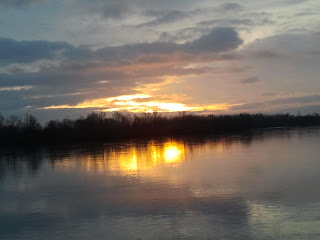 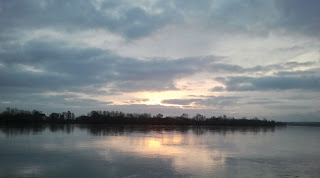 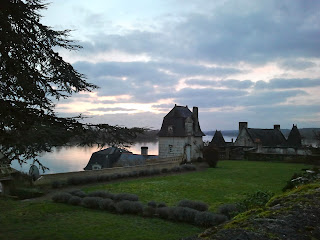 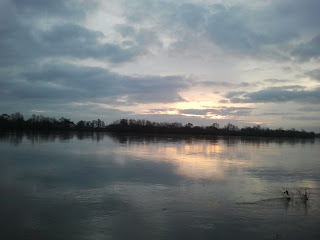 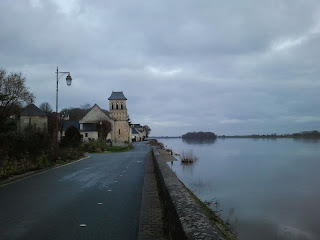 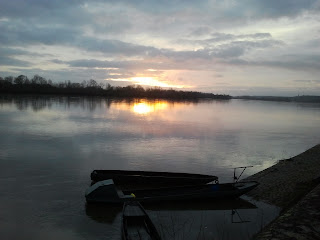 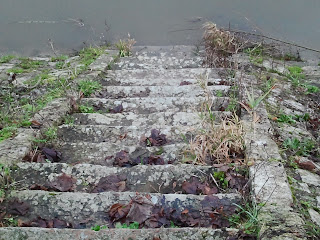 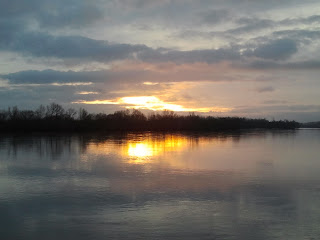 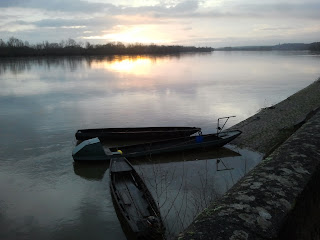 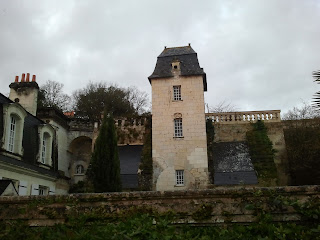 I don't know why people are scared of choux pastry.  It's not hard to make but does require plenty of elbow grease particularly if you beat in the eggs by hand.  There is a slightly heart stopping moment the first time you make it perhaps when it comes to adding the eggs as the mixture splits and looks like it's a complete disaster.  Persevere and it all comes right again quickly.

Basically you bring some water, milk and butter to the boil in a pan and then shower in some flour all in one go.  After a minute or two of manic mixing with a wooden spoon it forms a dough like mixture that leaves the sides of the pan and forms a ball - you continue to cook it for a couple of minutes to 'cook out' the flour and then add your eggs one at a time until you have a lovely shiny mixture. 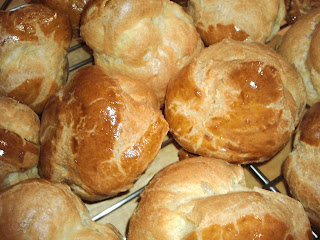 Here they are - little crispy choux buns ready to be filled with crème patissière. 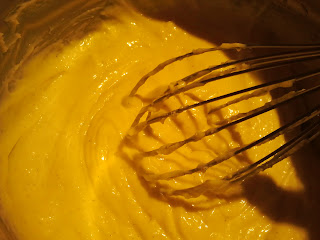 You can fill them with whipped cream or ice cream but I prefer a rich vanilla crème patissière. 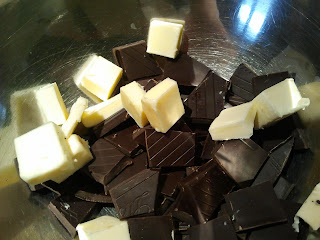 A dark chocolate sauce in the business so here I melted 70% cocoa chocolate with some unsalted butter and then added a couple of tablespoons of golden syrup, some caster sugar and milk.  It gives a rich shiny sauce that doesn't go hard when it cools down. 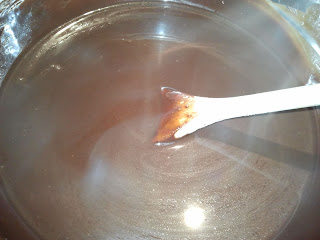 Et voila - here they are - filled and drowned in chocolate sauce. 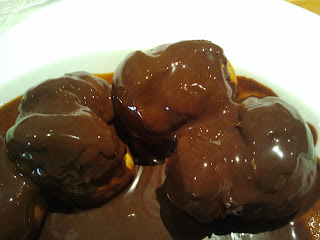 Yes, there are a few different processes involved but the great thing is that you can make a batch of the choux buns and put them in the freezer.  Bring them out and pop them in the oven for a couple of minutes to crisp up and then continue with whatever filling you prefer.

It's a classic and rightly so - bon appetit!

A good jelly stock is the business.

Continuing on my theme of soup (as the weather is still pretty chilly here in Anjou), I wanted to shout out the virtues of decent stock.  Of course I realise that a lot of the time life is too short to be fiddling around in the kitchen making stock and a decent quality stock cube/powder can be absolutely fine but, it does make a difference when you use the real thing. 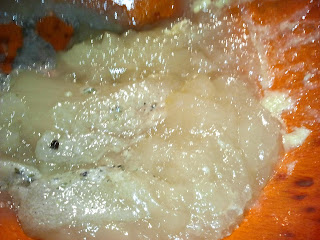 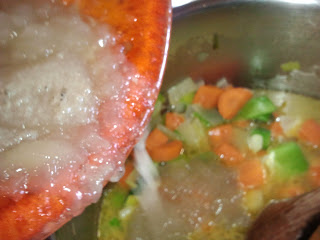 I'm sure many of you will look at the picture and think it looks pretty disgusting but this is my home made chicken stock that I used today to liven up a simple leek and carrot soup. Earlier in the week I served up a poached chicken for dinner.  This old fashioned dish is something that takes me back to my childhood and is real comfort food.  You place a whole chicken in a large saucepan and cover with cold water.  Add a couple of bay leaves, a sprinkle of sea salt and some whole black peppercorns and then slowly bring to the boil - turn down to a gentle simmer.  Depending upon your chicken it takes between an hour and an hour and a half to poach.  About 30 minutes before it's done I add little turnips, large chunks of carrot, a whole onion per person (peeled) and leave them poaching alongside the chicken until everything is tender.  I then take out the cooked veg and keep it warm, remove the chicken and keep that warm and then make a sauce by reducing some of the cooking stock to concentrate its flavour, adding double cream and a little cornflour to thicken. I season generously with ground black pepper and some sea salt and it's done.  Served with some buttery mashed potatoes it makes a simple dinner that is creamy and gentle in flavour and is just delicious.

Back to the stock.  The great thing about poaching a chicken in this way is that you have a large pot of ready made stock as a by-product.   I removed the meat from the carcass and returned the bones to the pot after dinner and then reduced the stock by about half.  At this point you could almost use it as a soup on its own it has so much flavour but it's also fantastic for risottos or for adding to sauces.  It keeps in the fridge for a few days or can be popped in the freezer for use another time.

There's something very satisfying about creating something delicious for nothing and as unappetizing as you may think it looks - trust me, a good jelly stock is the business.
Posted by Unknown at 15:34 No comments:

It has to be soup when there's snow on the ground 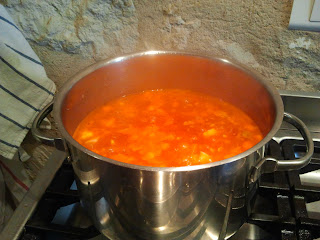 There's something very comforting about a big bowl of steaming soup when you look outside and see snow on the ground.  The thought of a cold sandwich fills me with dread - it has to be hot and nourishing.

Soup is so easy to make and takes little time.  Today I just had a root around in the veggie basket and finely chopped a bit of everything in there.  I sweated finely diced onion, carrot, cauliflower and curly cabbage along with a fat clove of garlic in a saucepan with a large chunk of butter and a little oil to stop it burning.  When everything had softened up a bit I added some shredded chorizo, a can of tomatoes and finally topped up with vegetable stock that I made up using a stock cube.  20 minutes of bubbling on the top of the stove it was ready.  I seasoned it with a little more sea salt and ground black pepper, added some fresh basil and served it up in big bowls with some chunky croutons that I made using old bread and grated parmesan.

The Relais de Bonnezeaux changed owners in November 2012 and was taken over by a new young team.  We called in for lunch yesterday with clients as it's located in a very good spot perched high amongst the hills of the Layon and with lovely views of the surrounding vineyards.  Naturally quiet at this time of year, we were one of 3 tables lunching on the menu which is available from Monday to Friday.  With 2 choices in each category it's good value at 15€ for entrée/plat or plat/dessert.

Service was incredibly slow bearing in mind there were so few of us eating - I dread to think how long we'd have been kept waiting if the restaurant was full.  Thankfully, armed with a glass of local Crémant we were able to while away the three quarters of an hour until our entrée arrived.  Unfortunately half of the party had opted for entrée plat while the other half plat dessert.  This meant those choosing the dessert option were waiting for a whole hour before receiving anything to eat.

That said my entrée was really really good.  A giant ravioli containing a whole egg yolk was served on a bed of intensely flavoured wild mushrooms and a moussey foie gras foam.  It looked like a fried egg except the white was paper thin pasta and the yolk perfectly runny.  Nigel had a soup of tiny vegetables served façon 'pot au feu'.  Baby carrots, turnips and potatoes in the bowl with a broth of light but intensely flavoured stock poured over the top.  So far so good despite the hunger of our co-diners.

I opted for the Merlan - whiting, which was stuffed with a confit of red onions and served with a simple creamy risotto flavoured with butter and parmesan. It was tasty.  Others opted for the chicken stuffed with fromage frais and served with tagliatelle.  Unfortunately one portion was completely raw in the centre so had to be returned to the kitchen.  It was replaced with apologies and we continued.  Desserts were good - a religieuse served with a caramel au beurre salé centre and pistachio particularly nice.

We had no time for coffee so had to rush off to our next appointment.  We arrived at 12h45 and left at 14h45 - too long for a 2 course menu style lunch - the service certainly needs to speed up a lot.  We were hoping to take a walk around the vineyards before our next stop with this was ruled out.

Final thoughts - nice spot, lovely location especially in the summer when they can open up the sliding doors, service slow, moments of triumph with the food but real low points too.  No further apologies were given when we paid the bill for serving up raw food - the chef was too busy having a glass of wine with 2 other guests who'd been eating alongside us - clearly friends or contacts.  I think they thought we were tourists.

What a shame. We take clients out to lunch on a regular basis and it's well located.  Maybe some of these are just teething problems and they'll find their feet in a little while.

On a recent visit to see Domaine Leduc-Frouhin in Anjou recently we took the time to have a close look at the 'falun'.  A sedimentary rock formed from marine deposits laid down during the Caenozoic era (up to 60 million years old), it contains thousands of tiny shells, sometimes crushed, sometimes whole and is generally friable (being mixed with sand and clay). 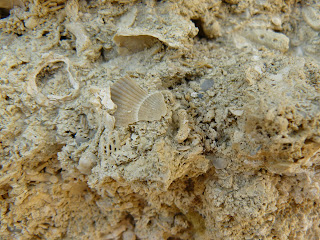 Falun was quarried in times gone by to correct the pH of highly acid agricultural soils and is common in Touraine and Anjou.  It looks quite different to tufa (here called tuffeau), the local limestone that dominates our landscape and was used to build all the houses and chateau along the Loire.
Posted by Unknown at 11:36 No comments: