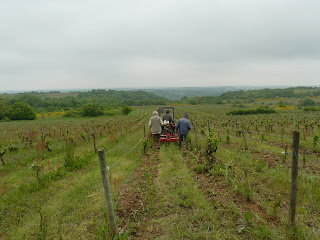 We arrived at the domaine rather late on what was a dull unpromising day, overcast and threatening to rain. Pierre-Jacques Druet introduced us to the wines of Eddy and Mileine Oosterlinck-Bracke a couple of years ago after a long morning tasting tannic reds in his cellar – we shared a half bottle of Quintessence and I thought it was probably one of the best sweet wines I had tasted in a long long time. So, we were looking forward to learning more about Eddy’s philosophy and tasting the full range that he currently produces in the d’Anjou in the heart of the Coteaux du Layon.

Mileine was busy in the vineyard – she and a helper were walking slowly behind the ‘decavaillonneuse’ (the machine used to pull earth back off the base of the vines put there in the Autumn). In a modern vineyard this would be unnecessary, but in this parcel the vines were planted in 1911 and the sensor on the tiny plough -like implement would do too 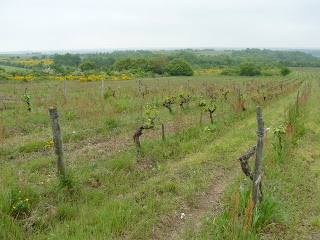 much damage left unsupervised. It’s painstaking work and takes about a day to cover . The tractor can only pass through the rows because when labour in the vineyard switched from horse to machine, every other row was removed.

Eddy and Mileine moved here in 1985 – it was the location that sealed it. They had wanted to buy an old property surrounded by vines but instead found this house, built in 1977 and you can see why. Eddy explains that the landscape has five layers, firstly two hills, then some hills that merge, then a village nestled in the middle, the plain behind and then the hillside ‘les Gardes’ at the back – one of the highest points in Maine et Loire.

At this point it pays to talk a little about ‘terroir’. The vineyards are in a hollow, closed on three sides by the slope of the Layon and 2 hillsides. Only one side is open, the West side and the vines are planted facing South South/East. The soil of ‘Black Anjou’ (where there is no chalk in the soil) is littered with black blocks containing quartz veins (called phtanites). These, together with the spillites in the hills and rhyolite volcanic stones (all within a circle of 1km), bring bitterness and minerality , something that Eddy considers essential to the flavour profile of his wines.

If you look in the ditch just in front of the vineyard to the right of the house, you can see layers of purple slate (Bonnezeaux has a lot of this) and a little further along, green slate. On top of this lies a layer of heavy clay. This layer varies between 30 and 50cm in thickness, allowing the vines to retain moisture but not get waterlogged, allowing the roots to reach down and e

xplore the many rocks and minerals below. 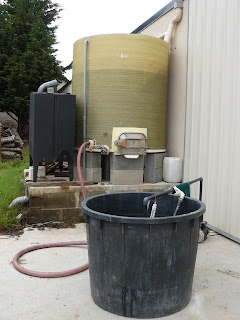 The estate was certified organic in 1994 but was run along organic lines before that with 1993 the last year when any chemicals and herbicides were used. Juchepie became biodynamic in 2007. Eddy does not get carried away talking about the principals of this stating that he was working organically before being certified and more so now, he was paying attention to the moon before, more so now. The main difference is the addition of the tisanes that are applied to the vineyard. He collects rainwater to make liquid compost which is pumped into a large plastic container containing a small mesh bag of compost. Air is pumped through the solution so that it takes on loads of oxygen which in turn provides a living environment for the millions of micro-organisms. The temperature rises to 36 degrees, bubbles come out as it begins to foam and ferment and 24 hours later, it’s sprayed directly on to the vines as a foliar feed.

Two vertical presses take care of the grapes after harvest. There is a vertical press somewhere in the cellar but it has not been used since 1999. On average it takes 6 passes through the vineyards to harvest the grapes over a period of 6 weeks.

The challenge is not to try too hard to extract what tiny amount of juice remains in the grapes and to extract as much of the dry matter as possible (which carries with it minerals, sugar, bitterness and acidity). Delicate pressure is applied which forces the largest and juiciest berries to split. Eventually the juice spreads throughout the cake (for it’s more like a lump of solid matter than ‘must’) and a 5mm trickle appears. Pressing takes around 24 hours – the resulting juice is orange in colour. 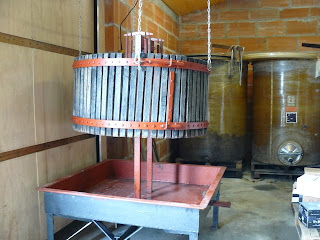 All the different juices are put together into a vat and then into barrels. There is no addition of enzymes, no cultured yeast and it can take days for the ferments to start and months to finish. The wines are left to undergo malolactic fermentation as and when they decide to and if they don’t well ‘tant pis’. Eddy thinks that the stage at which man should intervene is to stop the wine when it has finished. He ‘listens to the wine’ and he ‘waits’.

And finally, to the wines we tasted – all served at cellar temperature which on this particular day was perfect. Not too cold and still able to reveal all their different elements.

Beautiful colour, deep golden with a tinge of peach. On the nose, intense, concentrated

marmalade aromas with a caramelised note. Although I knew this wine would be dry it would not have been be a surprise if it was sweet (maybe due to the high levels of botrytis in 2004). It has just incredible length, something that Eddy puts down to fermentation in barrel. (10.50€)

From the vineyard on the right hand side where the clay layer is at its thinnest.

e note (that we loved). Softer and more gentle on the palate than the 04 and with an earthy overtone.

Deep intense golden colour with orangey reflections at the rim. Rich and full in the mouth I even sensed a little tannin which provided a good balance to the sugar in this Moelleux. Great acidity at the end and a large note of minerality. This would be a great food wine – how about pigeon cooked with raisons, duck with orange, grilled sweetbreads. (16.00€)

We discussed the importance of balance in wines with high residual sugar. Eddy says ‘sugar is like scenery – it can be big and even overwhelming but it should not dominate the players. When it dominates, it’s out of balance’.

Aged for 18 months in oak barrels this wine has a deep amber colour with peachy/orange notes at the rim. Lovely dried raisin, fig and marmalade aromas with some butterscotch, caramel and a touch of wax polish on the palate. Lovely length and freshness in the mouth despite the high residual sugar. Excellent and our favourite Moelleux. (19.50€)

A liquoreux from the same vintage as Les Quarts aged for 18 months in oak of which 50% is new. An even deeper amber colour with rose and peach tints. Although oak is evident on the nose, the wood certainly does not dominate the wine. The most striking thing is the lightness

on the palate – no hint of greasy cloying stickyness. The sugar is of course very evident but it is absolutely not overwhelming, managing to stay out of the limelight and allow the other qualities to sing for themselves. A long lingering finish with some candy and butterscotch notes makes this a real pleasure and our favourite. 26.00€ 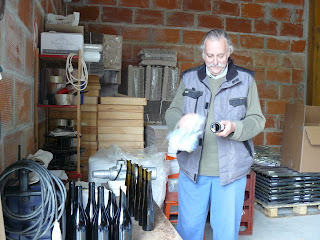 This wine is supposed to represent the quintessence of the vintage. Vinified uniquely in new oak barrels where it spends 18 months it has a deep ginger amber colour with golden, orange reflections. There was very little botrytis in 2003 making this a wine predominantly affected by

passillerage (shrivelling of the grapes concentrating the sugars and evaporating the water content). Rich and unctuous but not cloying it’s full of dried fruits with raisin and honey aromas. Soft and velvety backed up with a punch of acidity on the finish. Delicious. 34.00€

He also makes a small quantity of red from the Cabernet Franc. CF de Juchepie 2008 is light and fruity with sweet raspberry fruit on the nose. It has very low tannins and is easy going, young, fresh and easy drinking.

Looking to 2009, the vines are looking healthy and the risk of frost is receding. This is good news for Domaine de Juchepie as the frost in 2008 reduced yield to 6hl/ha and in 2007 to 10hl/ha. Does this encourage them to allow the vines to overproduce a little this year to compensate for the two bad years before? Absolutely not – although he thinks there will be many around him who will be counting on it.

Visits to Domaine de Juchepie are by appointment and cost 10€ per person to include a tour of the vineyards, wine tasting and a selection of fresh canapés prepared by Mileine. www.juchepie.com We can take you to see them as part of a Loire Wine Tour visiting inspirational vignerons in the region.